Thursday was a beautiful day in all ways. It began with getting a much appreciated life tick, the Penduline tit and continued with a trip to Slimbridge a WWT reserve. We live not too far from Welney another WWT site and visit there fairly regularly but rarely go to Slimbridge. A

It is a mixed reserve as it holds captive, non native birds as well as providing space for wild birds to thrive. We were only really interested in the wild birds and were soon out enjoying the Bewick swans and numerous other wildfowl which were showing beautifully in the sunshine. We had heard that there were two female Scaup and eventually found them. Of course they were as far across the pool as they could be and were hidden amongst lots of tufted ducks but that just adds to the challenge!

I love Pintails and was thrilled to see this pair so well, we later discovered there are over 1,000 there at the moment so I guess I hadn’t made much of a find!

Shell ducks and Shovelers were also plentiful and in the brightness of the day everything looked splendid. We met a couple that had earlier been at the Penduline tit site, they were arriving as we were leaving but they had not been as fortunate as us. Like Welney, Slimbridge is know for the swans that visit during the winter. Seeing them flying was a regular occurrence and a beautiful sight, they are so graceful. Unlike Welney there were no Whoopers but a good number of Bewicks although we were told there were fare fewer than expected.

We were pleased to see a group of Barnacle geese grazing alongside Canada geese and Greenland White-fronts. As you may imagine we saw numerous waders including Lapwing, Golden plovers, Redshank, Dunlin but we didn’t see a Little Stint that had been seen a bit earlier.

We had visited every hide and nearly walked past a blind without noticing it. We thought we would peep through, not expecting much and knowing it would be hard to see as the sun was shining directly at it. We were rewarded with a super male Mandarin duck, they really are stunning. I reckon if you asked an imaginative child to create a duck they might come up with such a design but it is fantastic that they really exist! Then of course there was the usual smattering of more humble birds.

After a well earned cuppa we decided to stay and watch the swan feed. Although when the feed began there were only two Bewicks on the pool, the ducks took full advantage and they were gradually joined by more swans. We had a nice rainbow behind the pool just before the feed began, but unfortunately the sun chose this time to disappear. 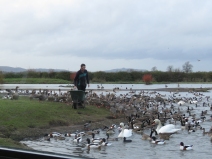 Slimbridge got our seal of approval and we were pleased that Peter Scott’s father, Scott of the Antarctic, encouraged his wife to “Make him interested in natural history” in his last letter home and she obviously did a good job!

We had a really good day, beginning with a life tick and adding six year ticks too. I suspect we will be returning to Gloucestershire soon.

Today has indeed been lovely weather for ducks and swans but not so good for going on a wild goose chase so we decided to shelf that for a day or so. Holkham and surrounding area can wait and instead we went to Welney which has the benefit of a large indoor, very comfy hide from which to watch the wildfowl. 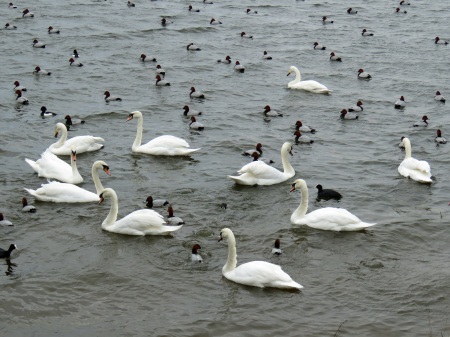 It rained heavily on the way there and the road out of our village was water covered in several places so we made a mental note to avoid it on the way home and take a different route. Although the rain ease off the day stayed gloomy and grey and I apologise that it is reflected in today’s pictures!

A Great white egret had been on the reserve for some while so we hoped to see that. Fortunately when we asked about it we were told it was on Lady Fen which is best viewed from the coffee shop. So of course we did the only decent thing, got some coffee and settled in! We didn’t have to wait too long and got good, though distant views of it.

If you have ever been to Welney you will know the layout but in case you haven’t let me tell you. A large visitor centre complete with cafe and shop is one side of the road then a long bridge across the river leads to the hides and main part of the reserve.

The water levels were very high so there was no sign of the island which is just outside the hide. There were however plenty of swans both Mute and Whoopers and loads of duck, mainly Pochard. We were fortunate to have about a dozen Bewick swans flew right in front of us and over the hide.

Further away was a spit of land with hundreds of waders on the majority being Black tailed godwits. Every now and then they took to flight, circled and landed back where they had been originally!

Almost all the Pochard are male, the females arrive later, oh my goodness this reminds me of a very embarrassing conversation I had at Welney some while ago. I was chatting with my birding companion about where the swans came from and where they move on to next. I was just saying that although I see why they come I can’t see why some then move back to Russia as it is so cold! ( I know it is instinct and their food must be there at the right time etc). Just as we were talking about this a couple came in and he asked a couple of questions about the birds and got chatting. I then mentioned what we had been talking about and repeated that I didn’t  understand why they returned to Russia. The lady had been silent up till then but at that she said, in a beautiful, clear Eastern European accent, “Russia is a beautiful country, I would go back tomorrow if I could!”

As the ground didn’t open up and swallow me I could only try to talk my way out explaining that my thinking was simply based on the weather, oops oh well hopefully she has forgiven me, I really didn’t mean any insult to her homeland.

After leaving Welney we drove slowly along the bank of the Great Ouse hoping to see Grebes. We were not disappointed as almost immediately we saw a solitary Great crested grebe, I am hoping later in the year to get good views of these birds doing their courting dance…watch this space! 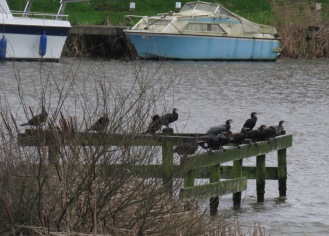 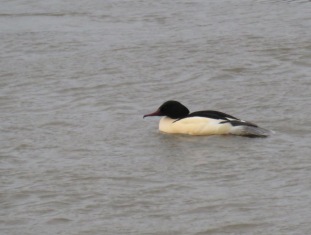 Cormorants gathered up near Denver slice and there we also saw three Goosanders, beautiful birds, I just managed a quick snap from the car before they swam too far off.

So the rain changed our plans today but didn’t stop us enjoying a day out. We added 11 new birds, nothing else as sadly I can’t allow myself to count the two alpacas that we saw 😉